Located inside the LAX Flagship Lounge, the Flagship First Dining area, is an exclusive sit-down restaurant experience. We were excited for this experience since we have already been to JFK and LAX flagship lounges. It was time to try the dinning out. 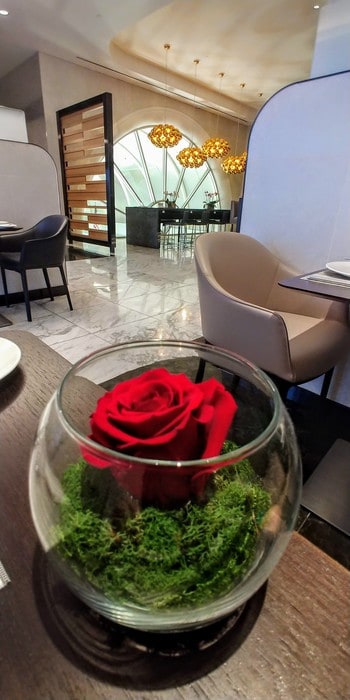 Inside the Flagship Lounge at Terminal 4, Concourse level across from Gate 40.

The Check in Experience

Once we entered the Flagship Lounge there were agents to check our boarding pass and passports. They gave us access to the lounge, and since we were flying flagship first, we were invited to join for Flagship First Dining. Keep in mind, it is recommended by American to allow for about an hour for the dinning experience. Since we had plenty of time we were happy to try the dinning.

Once you enter the Flagship Lounge, the Flagship First Dining room entrance is down a long hallway to the right.

The room was beautifully decorated keeping with the modern Flagship theme and color scheme. 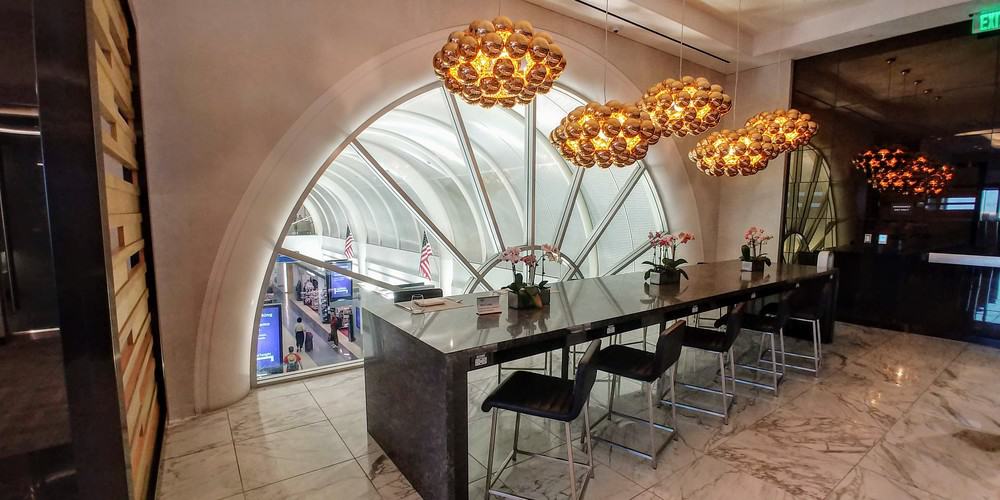 As we walked in there was a long communal table to the left and a bar. There was plenty of seating at the long table with many outlets to charge up. The ambiance is beautiful at the communal table with a window directly in front and chandeliers above. 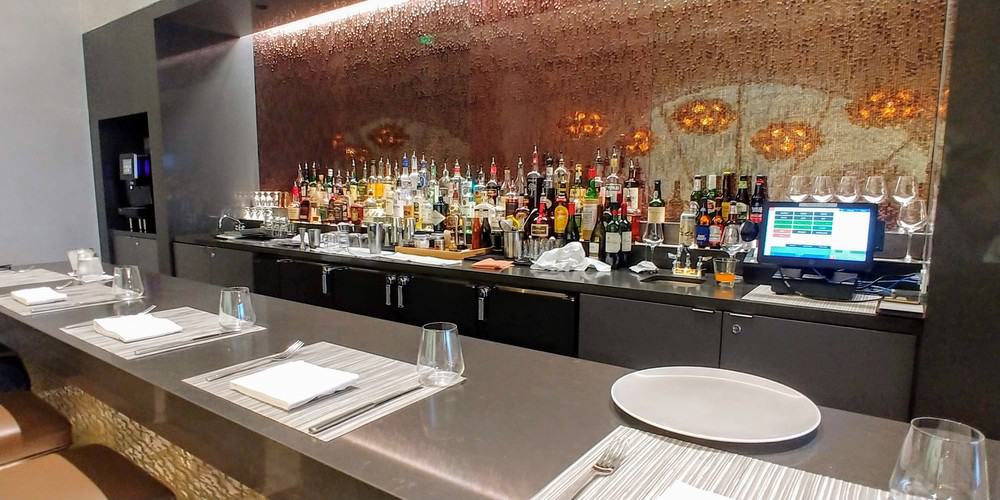 To the right is the main dinning room facing the east side of Terminal 4. 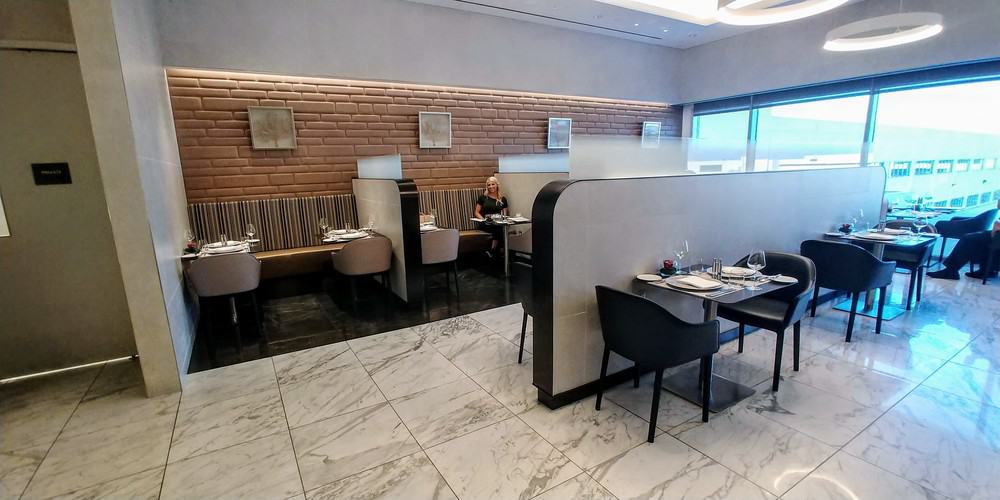 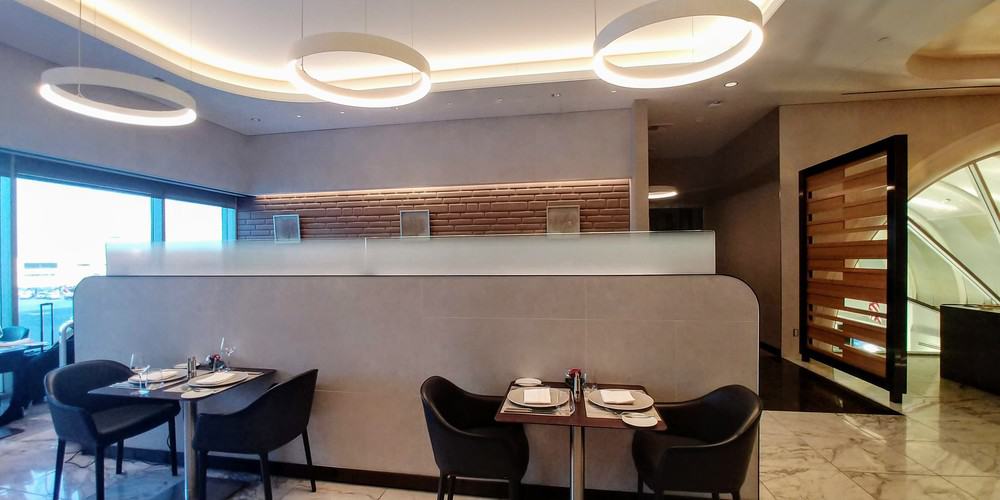 We wanted to sit by the window for some nice tarmac views, but there were only 3 tables along the window, and they were all originally taken. By the time we were finishing dinner the window view tables had opened up and we were able to snap a quick photo. 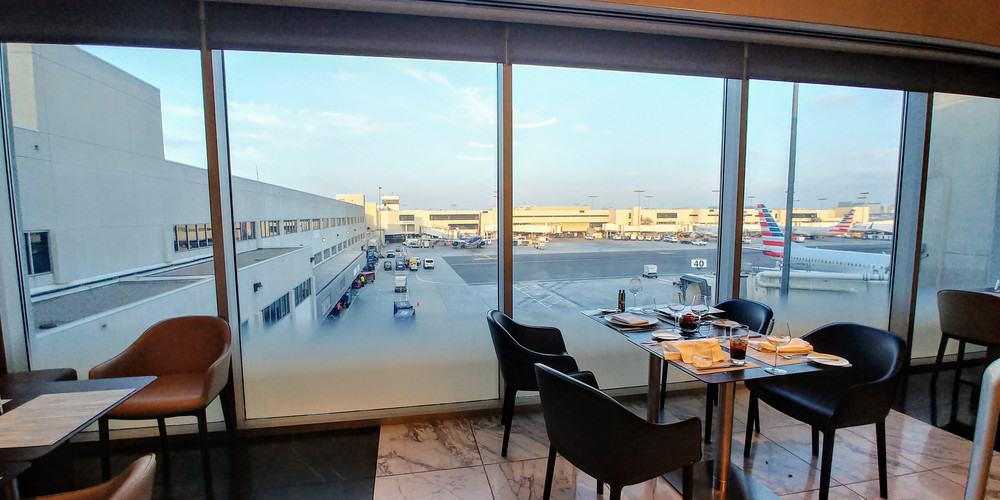 We were seated in a booth with dividers that added privacy. We were the only guests in the dinning area aside from the window tables taken. 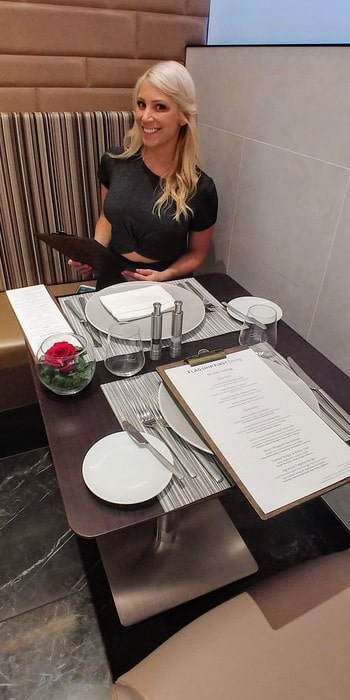 The table layout was nicely done, however the table itself was a little small (see the menu sticking over the edge!) I especially loved the rose on the table. 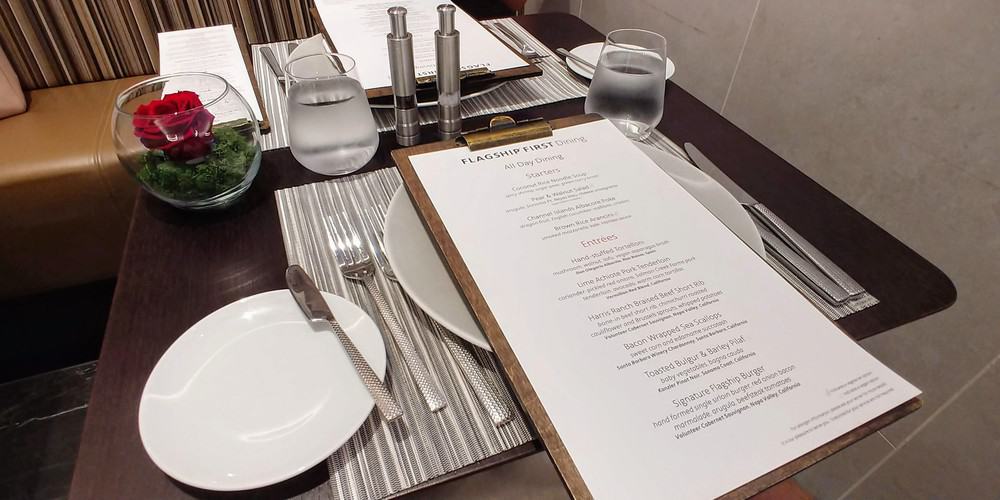 There were plenty of outlets at every table. Brandon thought I was hiding our outlet from him since I was sitting in front of it. You just have to look for them, they are underneath every table. 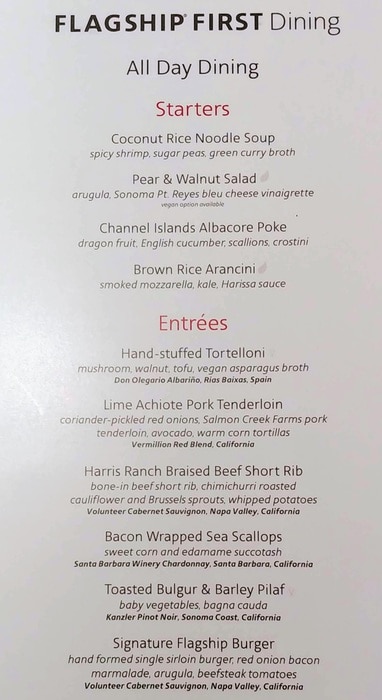 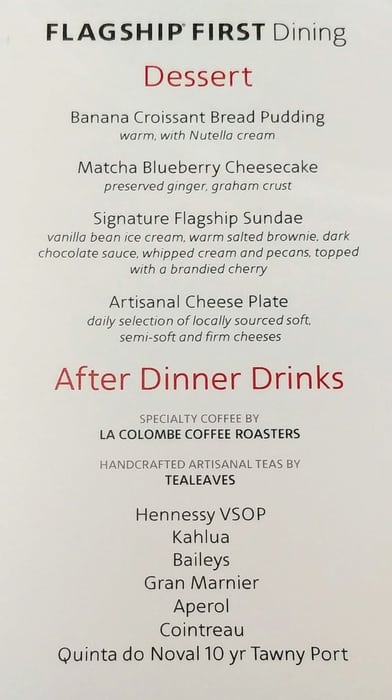 Since there were so many items on the menu, Brandon and I decided to split everything.

We started with the channel islands albacore poke which was simply amazing. The poke was very fresh and seasoned perfectly. 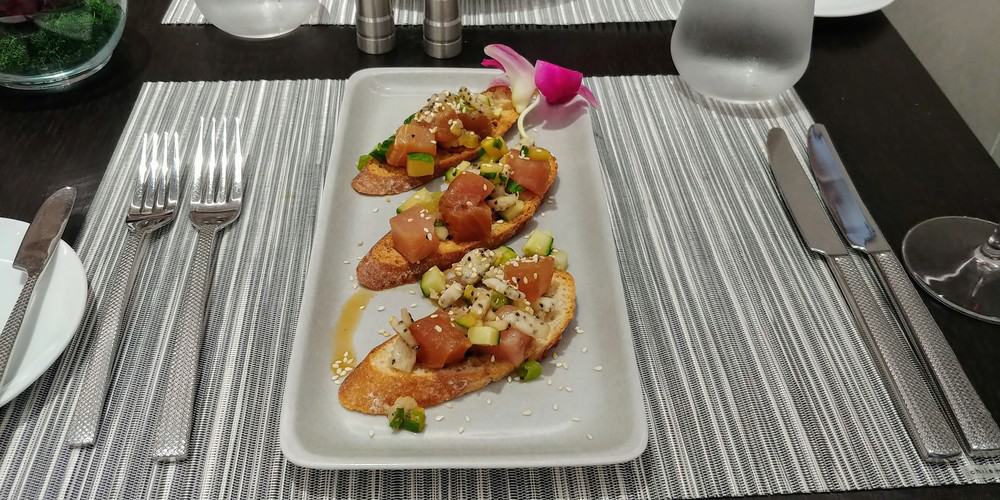 The pear and walnut salad came out next. All the ingredients were fresh and the light bleu cheese vinaigrette was perfect. 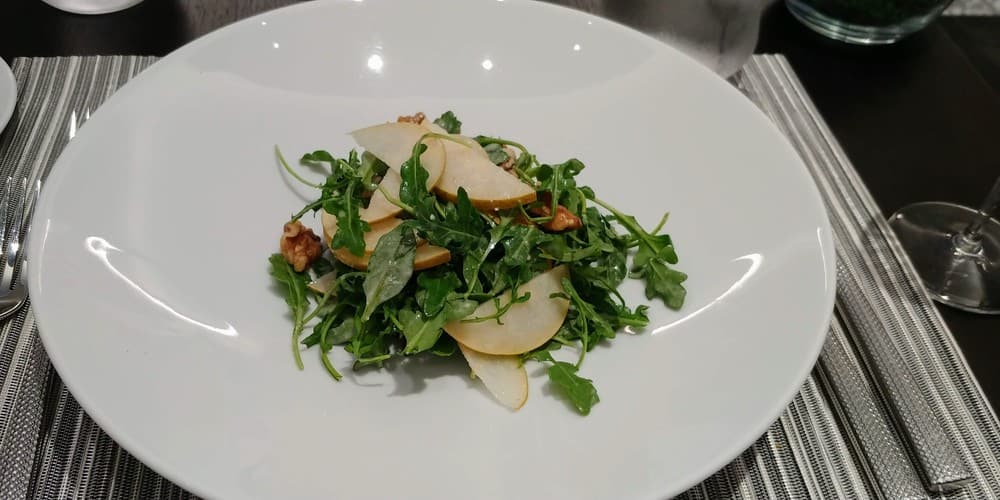 We were so hungry that we decided to order three main courses! Well mostly Brandon said he would eat two and half himself, so we settled on three. The lime achiote pork tenderloin, Harris ranch braised beef short rib and bacon wrapped sea scallops.

Surprisingly the lime achiote pork tenderloin was our favorite. The dish was well balanced, perfectly cooked and had a very nice seasoning. 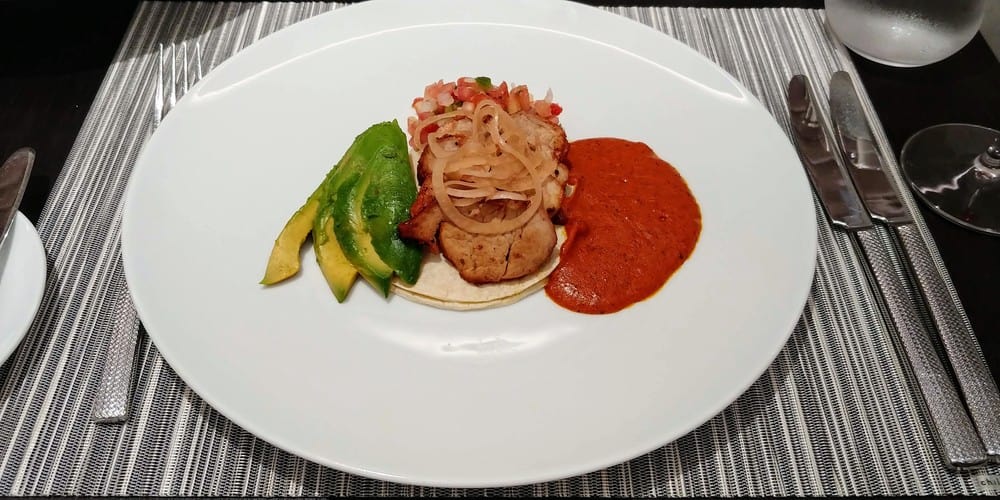 The braised beef short rib would normally be Brandon’s favorite, but he said the dish wasn’t cooked very well. The beef was only moderately warm and it seemed like the meat was mostly fat. 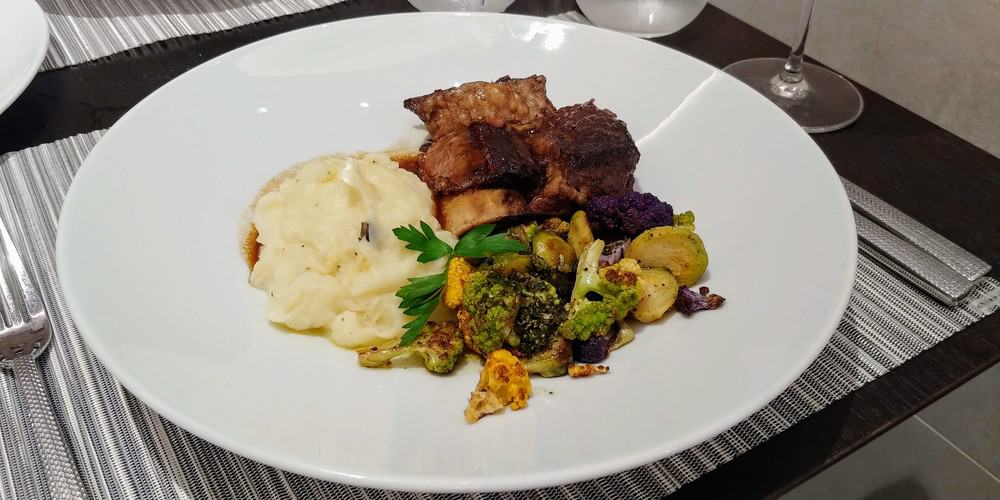 The bacon wrapped sea scallops, another dish you would think would be a favorite was actually not that great. The scallops were over done and were very salty from the bacon. 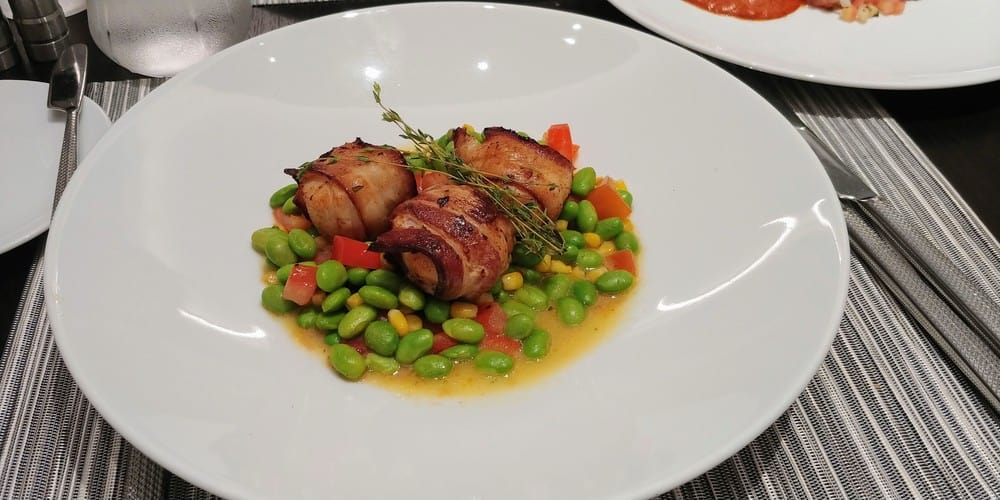 While the main courses were lacking, we especially enjoyed the champagne, cocktails and dessert. 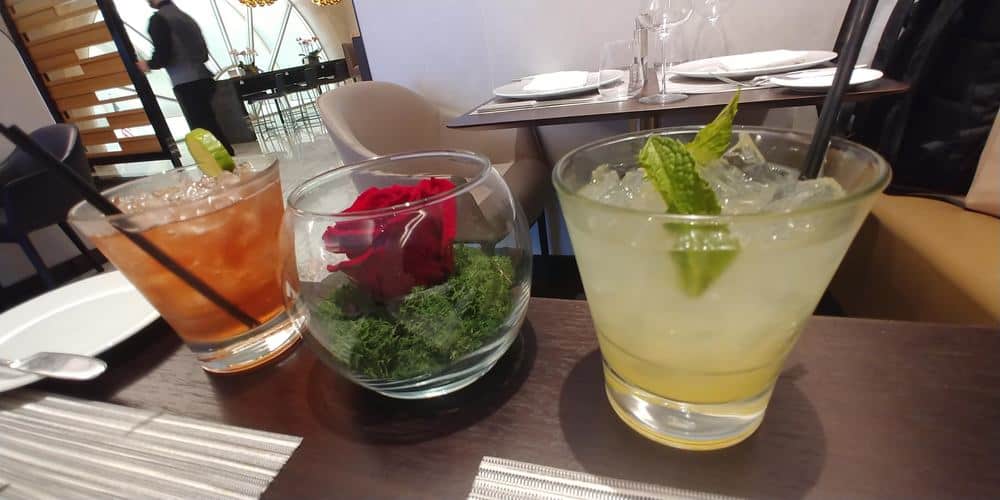 Our waiter convinced us to try all three desserts even though we were completely stuffed at this point. All of the desserts were delicious, but I would have to say the signature flagship sundae was our favorite. 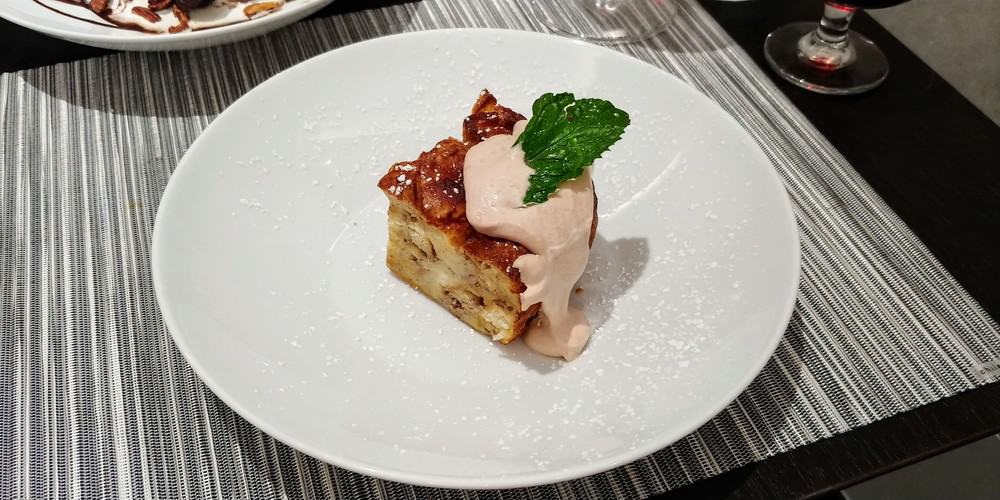 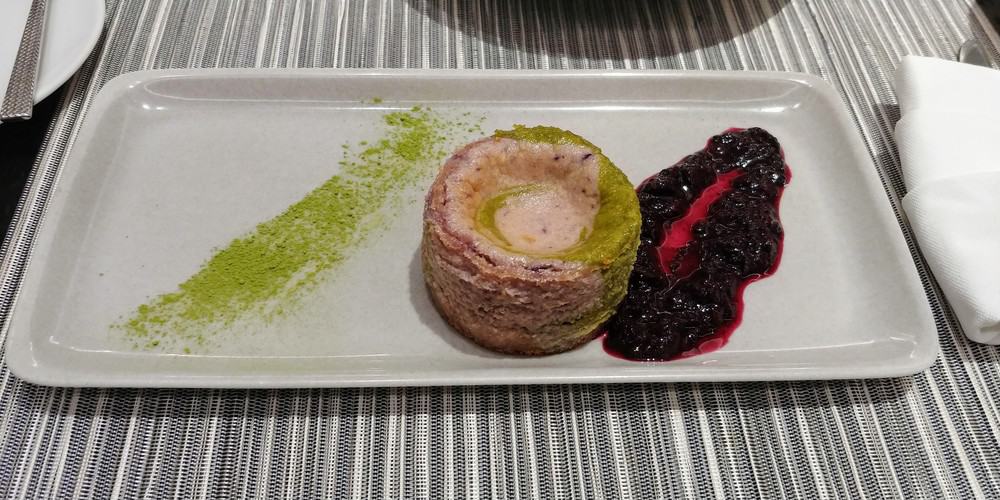 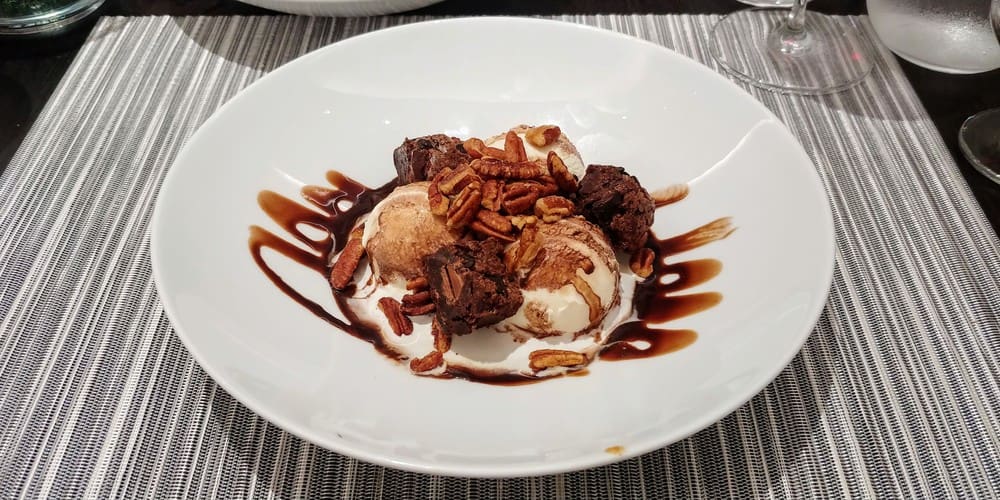 Flagship First Dining is absolutely delicious and worth making the time for. It was a very relaxing environment and the service was great. While the appetizers, drinks and desserts were fantastic, I think the main courses need a little work. Keep in mind Flagship First Dining is a relatively new experience, so they still may be working out some issues. Overall though, it’s a no brainer to stop by if you have access and about an hour to spare before your flight.

[…] premium domestic transcontinental routes. From Flagship First Check In to the Flagship Lounge and Flagship First Dining, the overall experience is something that you would normally expect from an international first […]