We used 40K Delta miles each to book this flight. The retail value is about $21,000 NT ($707 USD) which comes out to be 1.75 cents/point. While not as good as some other business class and first class redemption values, we had to make this flight and didn’t think it was worth paying $400 out of pocket for economy or $700 for business class.

We actually completed the check in process at the Taipei MRT station (A1 stop on the purple line) in Taipei. There were exactly zero other people in line so the process was quick and easy. Due to the last minute decision to fly business class instead of coach, our seats weren’t together, so we had the attendant put in a request for seats together if any opened up.

We then hopped on the express Airport MRT purple line and arrived at Terminal 1 35 minutes later. It was actually quite nice to check in at the Taipei MRT station as it saved us time. I would definitely recommend doing this if you are flying economy as the economy check in lines were fairly long.

The China Airlines Lounge in Taipei was nicely done with an upscale yet traditional rustic charm. The breakfast food was mostly Taiwanese, but had high quality fresh ingredients. 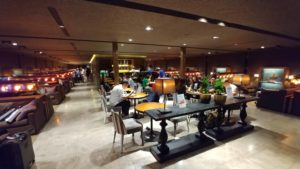 Upon boarding the flight attendant notified us that they were able to move us to two seats together! No issues to note in this flight review.

The China Air A330-300 has two configurations in business class, either 5 or 6 rows in a 2-2-2 layout. There is no first class. The 5 row configuration (which we had) is the newer better version with angle lie flat seats, larger TV screen and a more modern look, while the 6 row configuration only has reclining seats with a smaller TV screen and slightly dated design. Make sure to check which version you have before booking! We got lucky for this flight review and ended up with the better configuration. 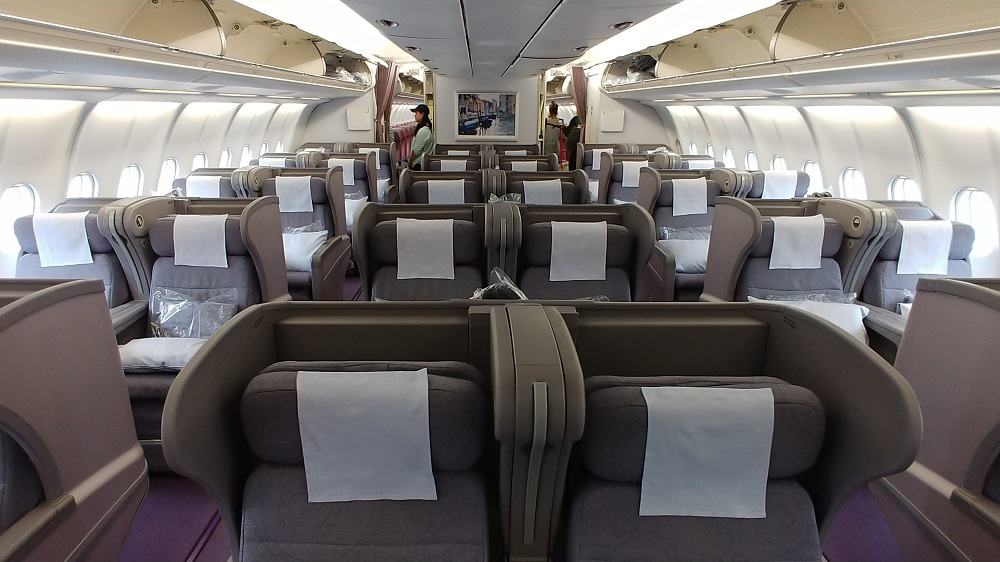 The seats themselves weren’t stellar, but did feel fresh and well maintained. 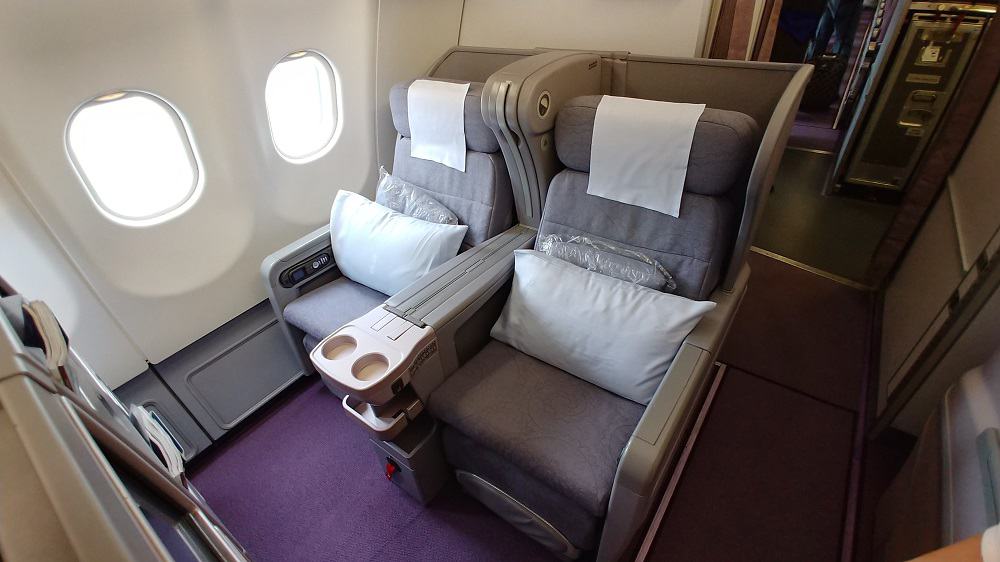 I would generally say the seats on the sides are preferable to the seats in the middle. 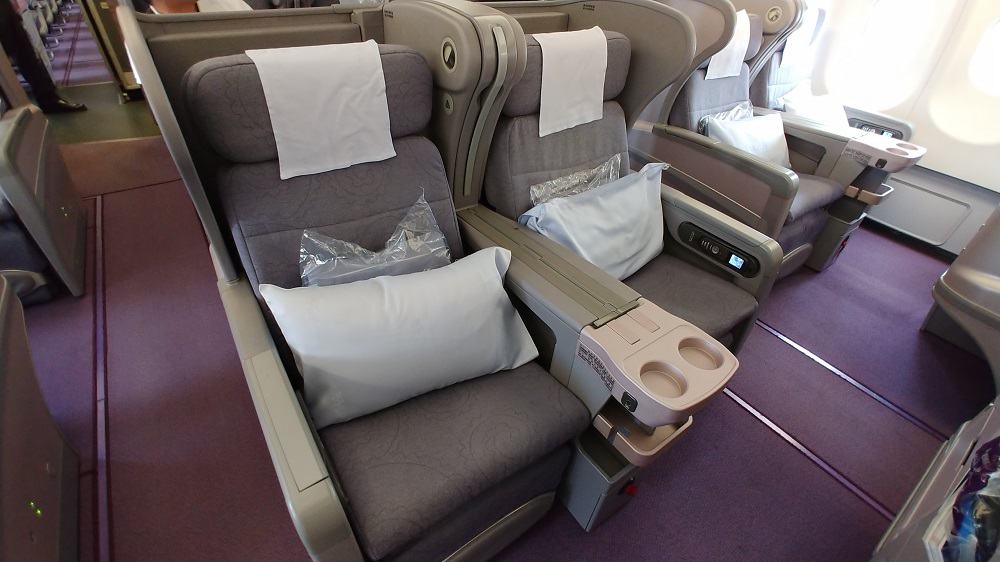 The seats are an angle lie flat design with 63 inches of pitch, 20 inches of width and 166 degrees of recline. While it was plenty comfortable for this regional flight, it is less preferable on a long haul flight than the completely lie flat seats in the 777-300ER reverse herringbone configuration. I was able to get a little sleep in the angle lie flat seat though. 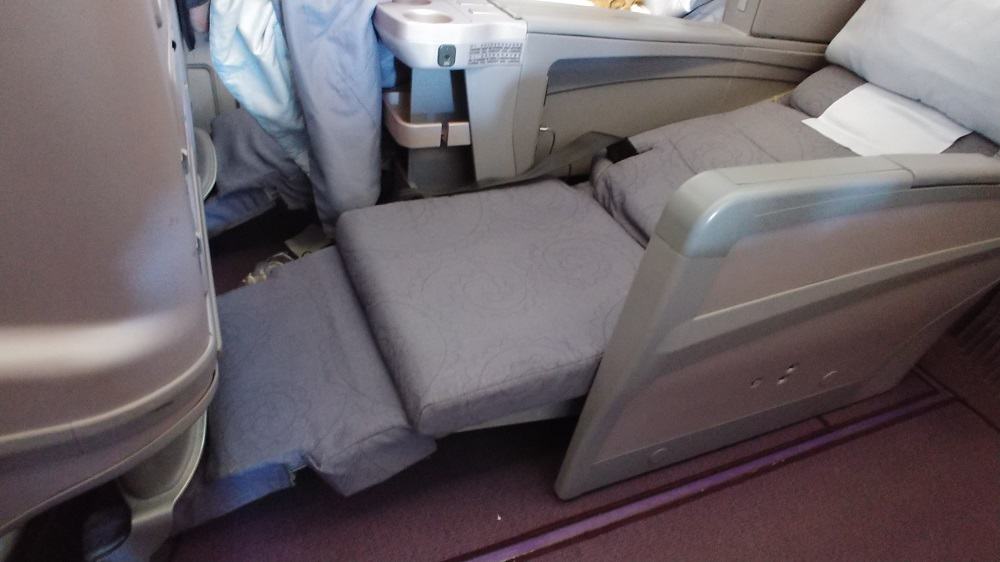 The angled lie flat business class seats do recline pretty nicely though. I flew most of the trip in the reclined position. 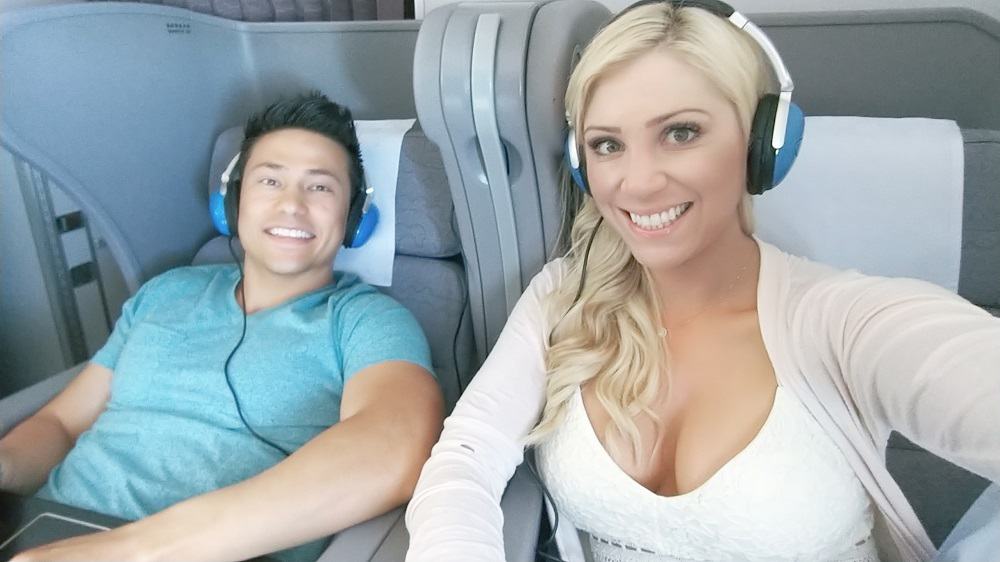 The seat controls were in the armrest and easy to use. It took us a few minutes to find the controls though, we looked around everywhere except for IN the armrest. 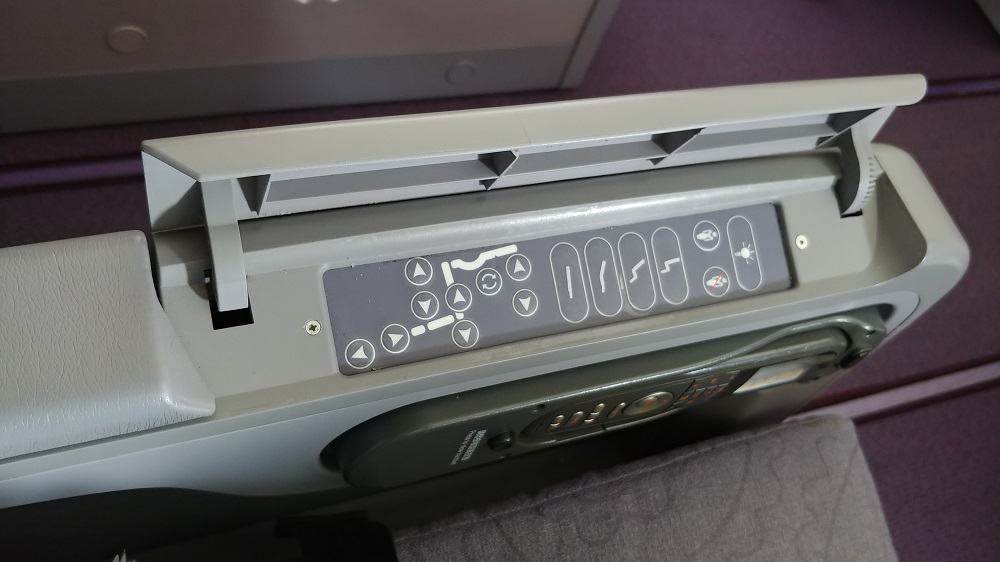 The entertainment controller was fairly standard and as the TV screen was very nice for business class. I forgot to measure, but the screen size was probably around 16 inches, much better than the other versions I’ve done flight reviews on with 10 inch screens. 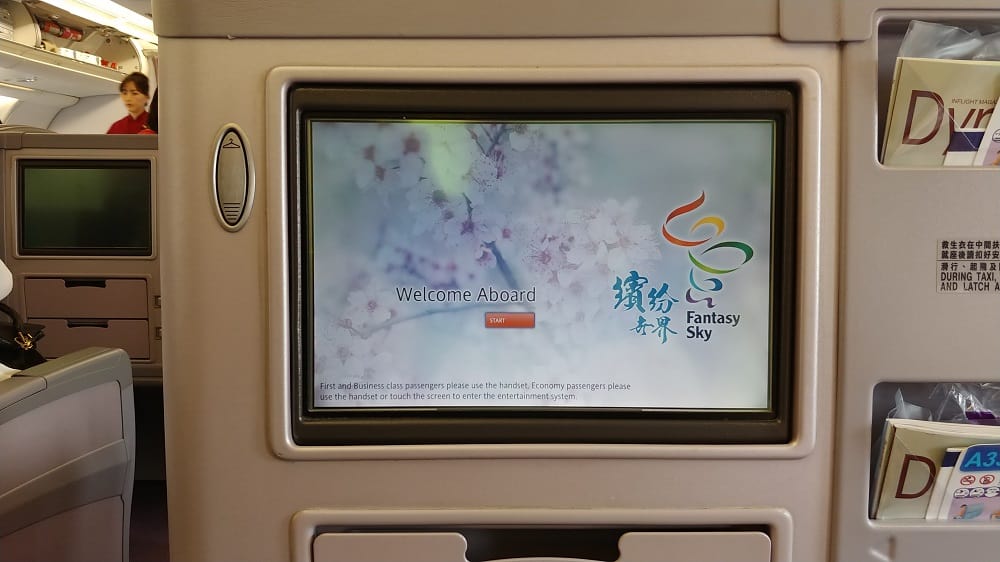 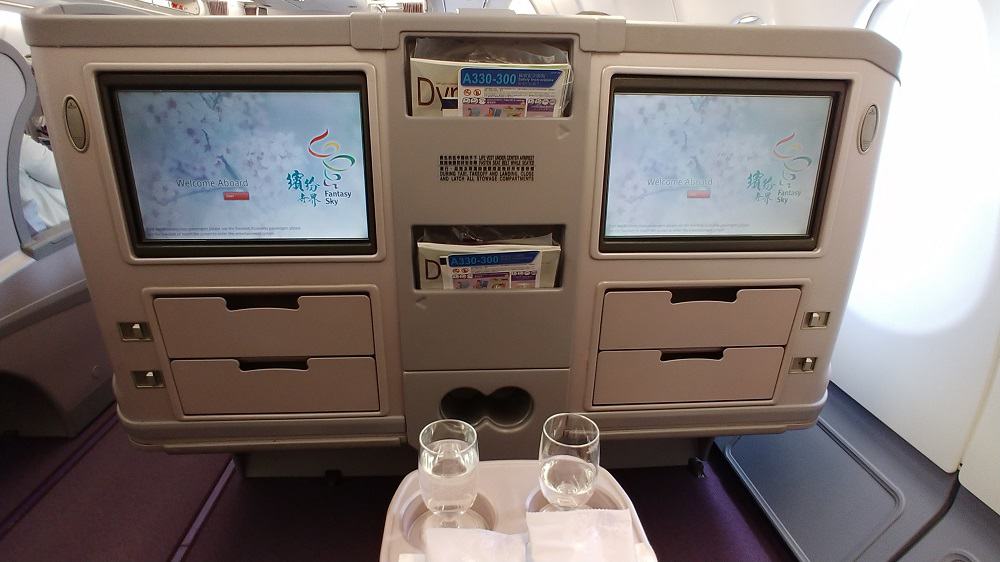 The headphones, while not Bose quality worked just fine, no issues for this flight review. 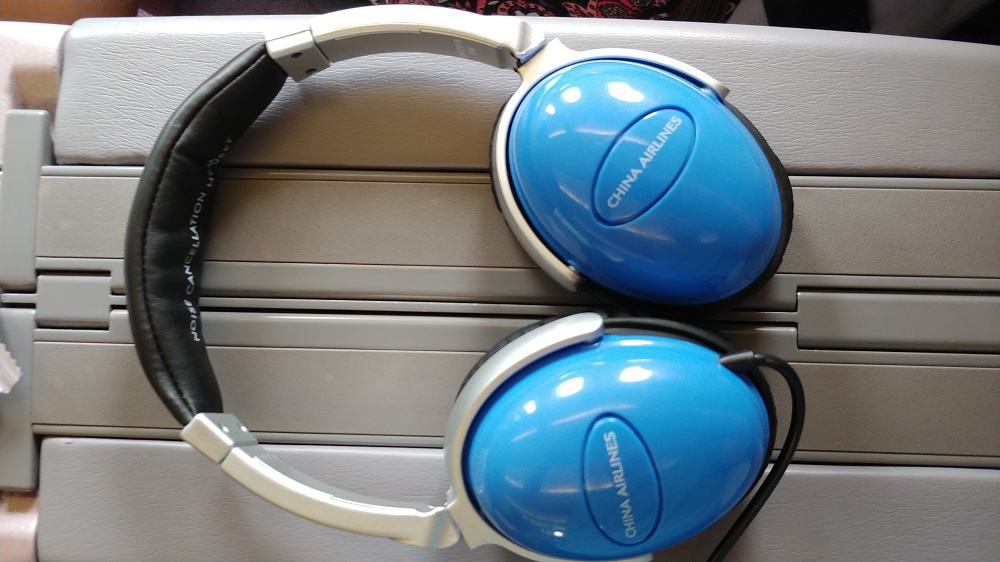 There was an outlet as well. While it looked slightly worn, it worked without any issues to note. 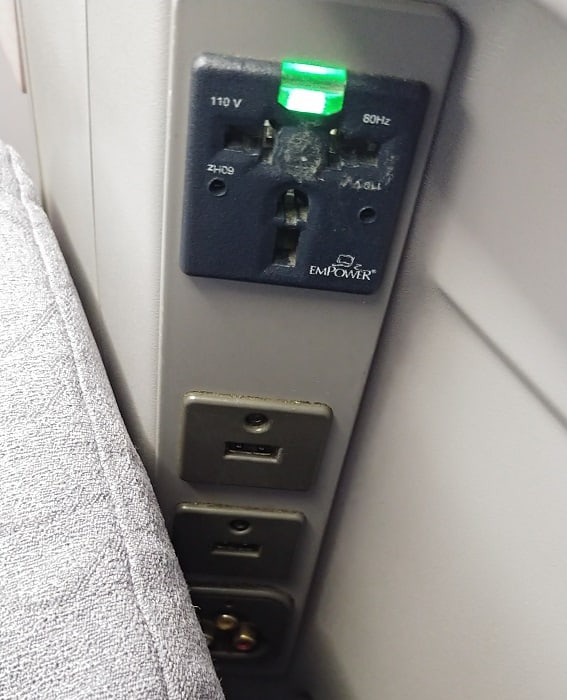 The flight itself was about 5 hours long and was fairly uneventful. Jess and I were so excited to get to Bali that it felt like much longer! The service was great, the flight attendants were very attentive, and it was a nice touch to offer slippers on a regional flight. 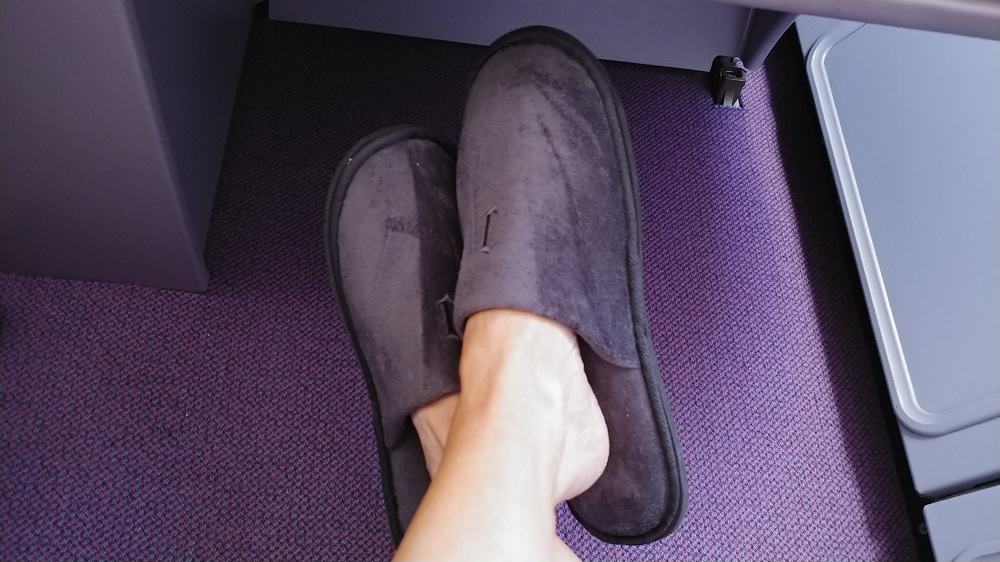 The food was just ok. Not bad, but nothing memorable for this review either. I was pretty full anyway so that wasn’t an issue. 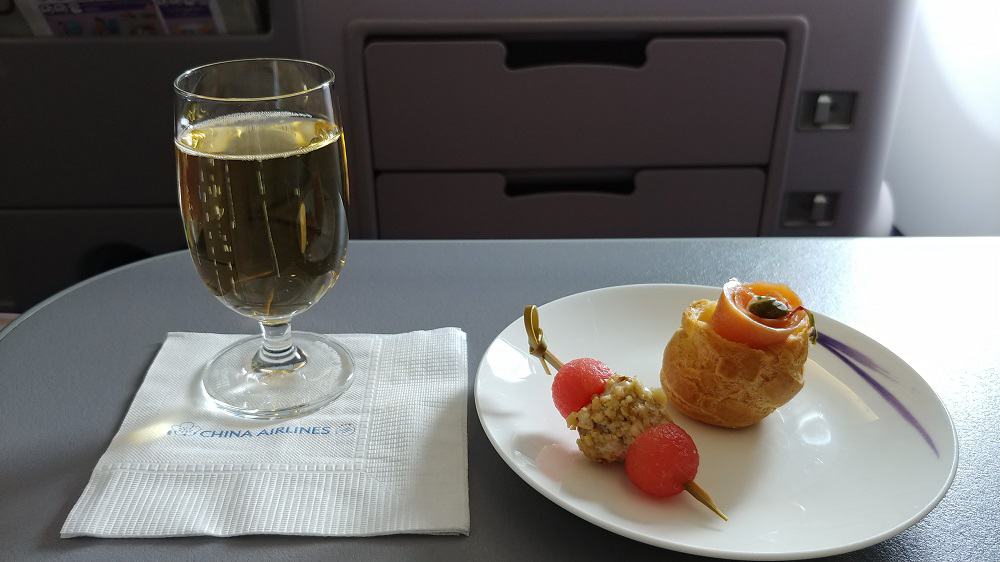 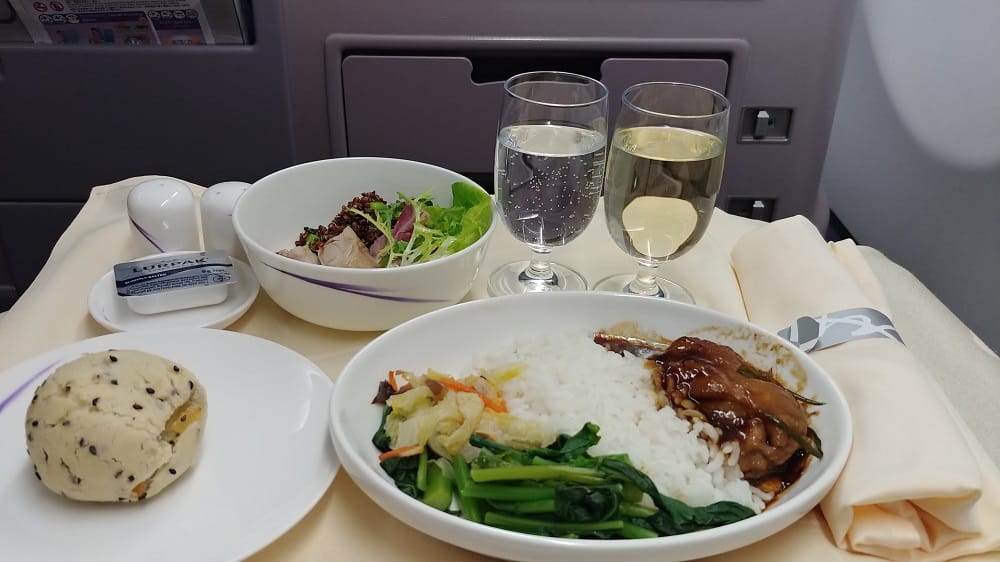 While the business class angle lie flat seats on the China Airlines A330-300 aren’t cutting edge by any means, they felt fresh and well maintained. They were plenty comfortable for a regional flight and I was able to get some shut eye. The crew and service was fantastic making for an overall good flight experience.