Cathay Pacific business class is known for having amazing airline food and service.  This two hour short haul flight review from Hong Kong (HKG) to Taipei (TPE) on a new Cathay Pacific 777-300ER was no exception. While I wouldn’t usually book business class on a flight this short, it was part of our journey from LAX to Taipei using Alaska Airlines miles.

This flight review from Hong Kong (HKG) to Taipei (TPE) was was the the second leg of our journey from LAX to Taipei. To see a flight review of our first class experience just days before, check out Cathay Pacific First Class LAX to Hong Kong.

We used 70K Alaska Airlines Miles to secure our two part booking. While it was technically a first class booking, unfortunately there were no first class seats open on this flight. It was a only short two hour regional flight so it wasn’t a big deal.

Since the retail cost of the two flights was over $10,000 per passenger, that meant getting over 14 cents/point, talk about value! This is again why I feel that Alaska Airlines Miles are some of the most, if not THE most valuable airline miles out there.

Check in was actually done on Hong Kong Island at the Hong Kong MTR Station. This simplified the entire process and saved time at the actual airport. Baggage can even be checked in at this MTR station if you are there at least 2 hours before your flight. We then took the MTR to the airport with minimal baggage and no issues.

With our Cathay Pacific business class ticket we had access to multiple lounges at the Hong Kong Airport. We had about four hours before our flight and since it was our first time there we wanted to try as many as we could!

Overall I would say the Qantas Lounge and the Cathay Pacific The Pier Lounge were the best. The Qantas Lounge had better food and nice open views of the tarmac, but The Pier had multiple separate rooms (The Food Hall, The Bar, Noodle Bar, Teahouse) and the Relaxation Room where you could take a quick snooze. 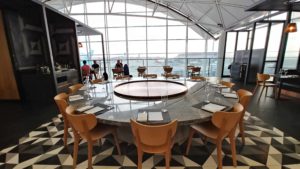 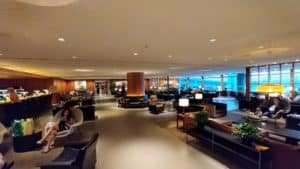 The third best business class lounge was the Cathay Pacific The Bridge Lounge with two entire wings to the lounge, relaxing decor and delicious food. 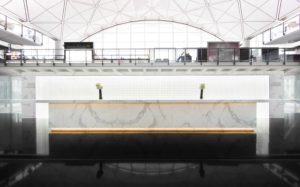 The Cathay Pacific The Wing Lounge is considered their flagship lounge, however I found it to be crowded and the food wasn’t very good. If we had access to the first class portion of the lounge I’m sure it would have been a different story though! 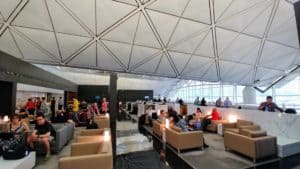 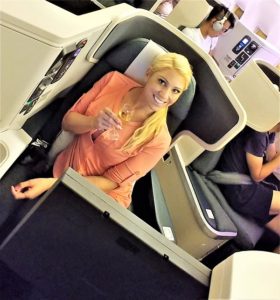 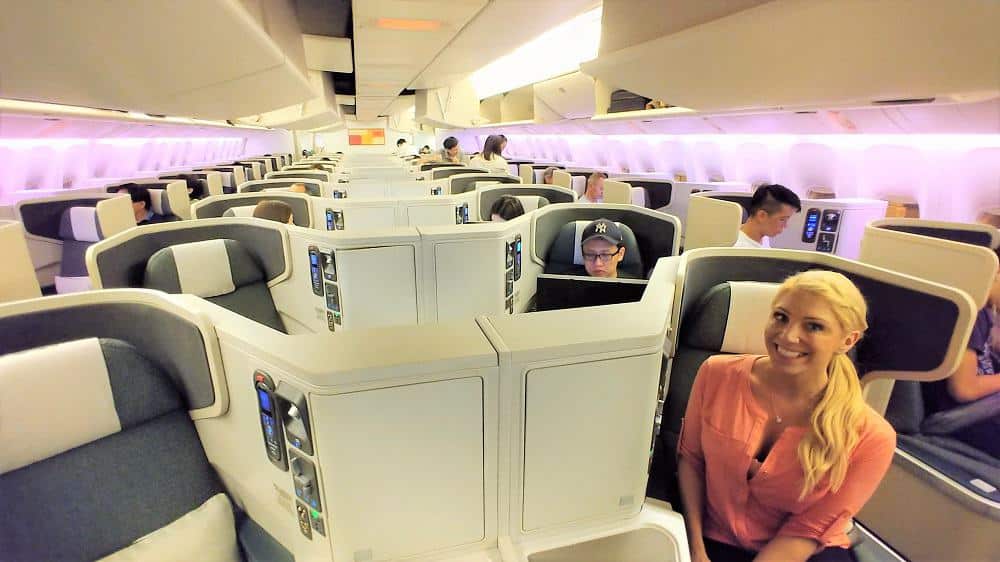 The first class cabin has only six seats. There are two rows arranged in a 1-1-1 configuration. 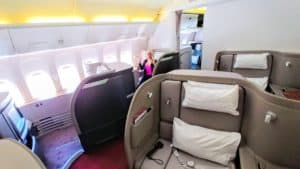 The premium economy cabin has a 2-4-2 arrangement with 34 seats. 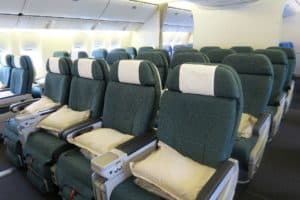 While the economy cabin has a 3-3-3 arrangement with way too many to count seats. 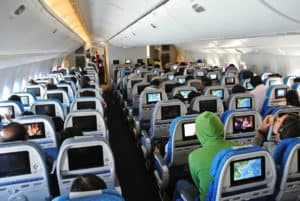 The business class cabin is arranged in a reverse herringbone configuration. The two center seats are probably best when traveling with a partner as they are angled toward each other. However you do have to lean forward pretty far to talk to the other person! This may be welcome though when traveling as a solo passenger as even these center seats offer plenty of privacy. 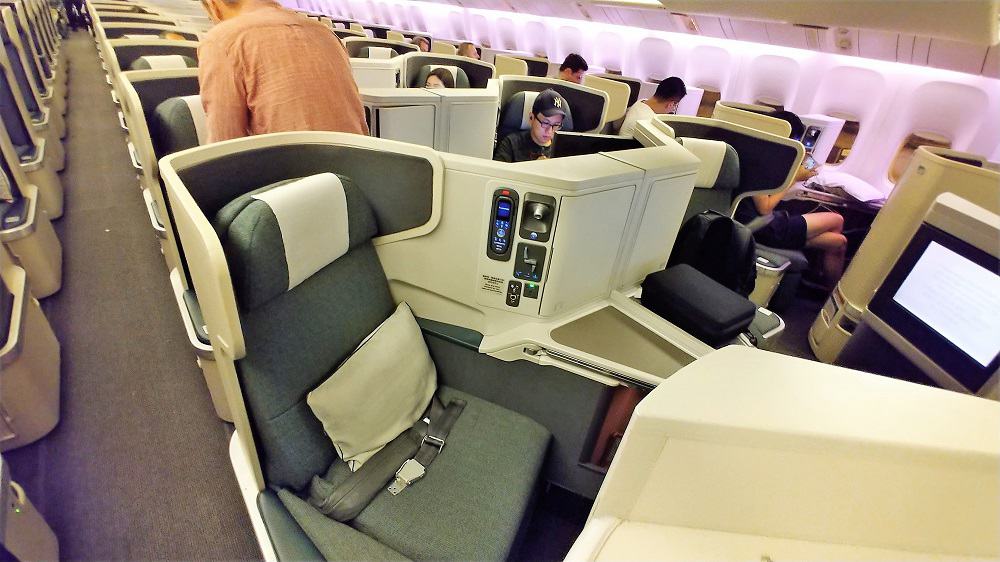 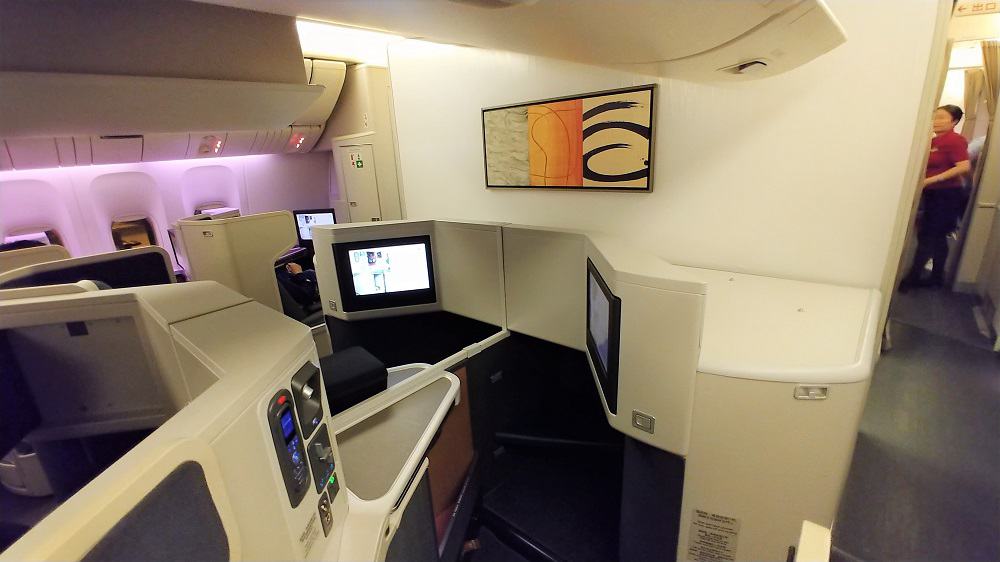 The single side seats offer the advantage of having windows and slightly more privacy as the seat is angled away from the aisle and toward the windows. Most solo travelers would likely elect for the side seats. 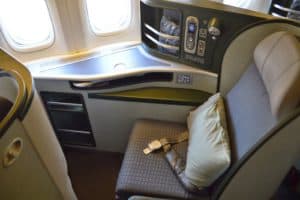 The seat was very comfortable and comparable to others in the reverse herringbone configuration. It is a completely lay flat seat with 72 inches of pitch, 81 inches of total bed length and 21 inches of width. 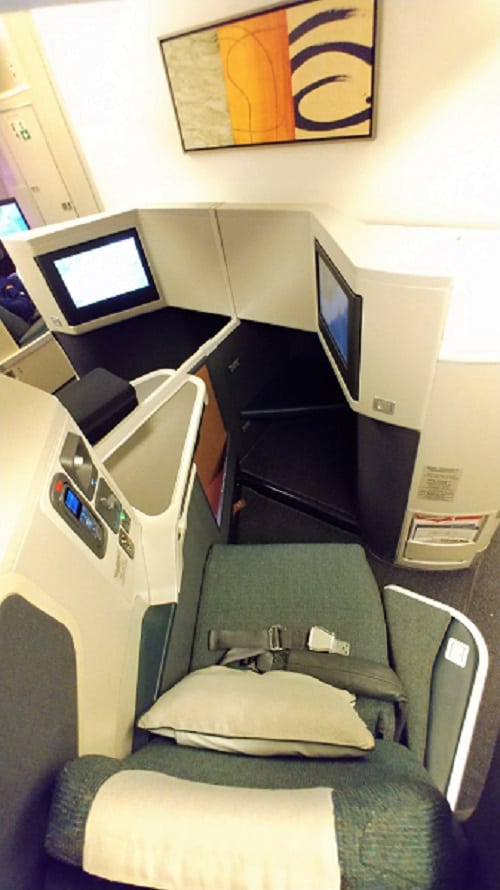 As you can see there is plenty of room for your feet and to lay fully flat. Jess caught me napping instead of working on this flight review! 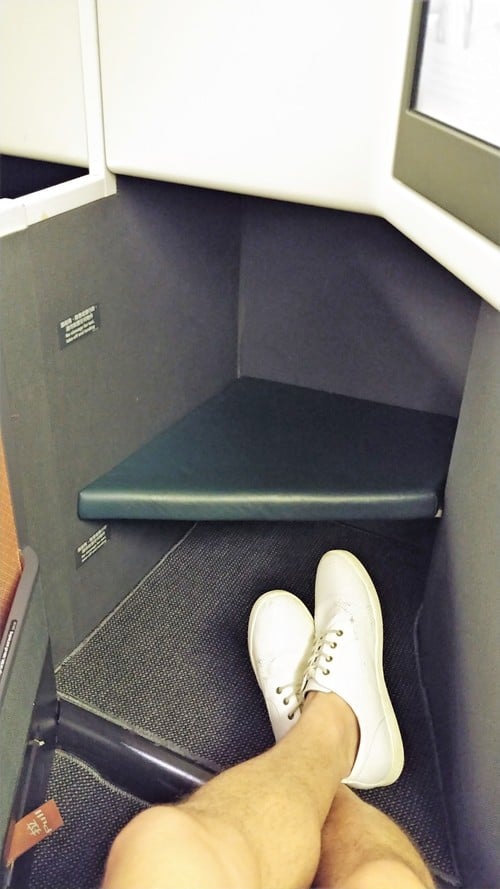 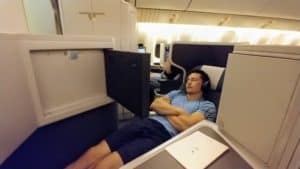 There is storage next to the seat and in the foot cubby area. 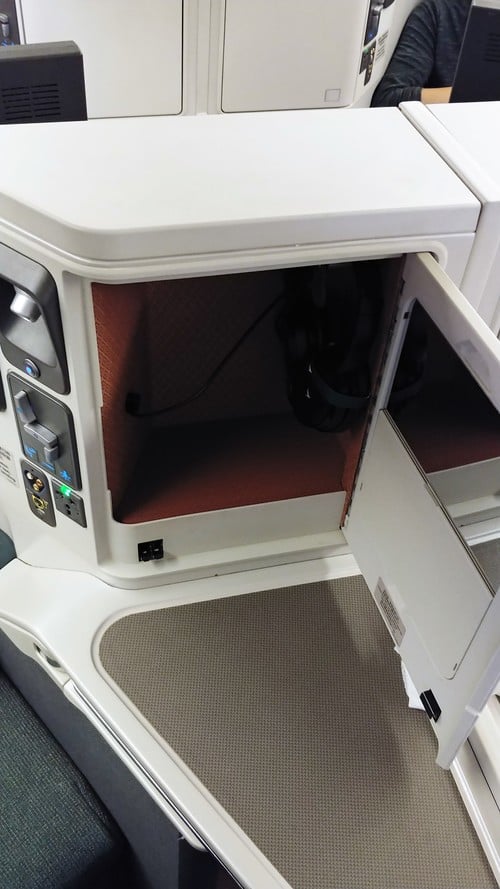 The seat controls were next to the TV remote and reading light.  There was a universal plug with USB outlet as well. No issues for this flight review 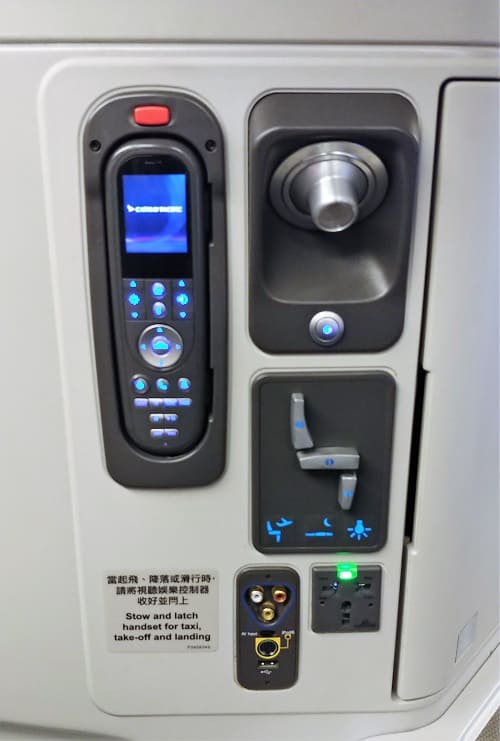 The TV screen was large enough and could swing forward as well. 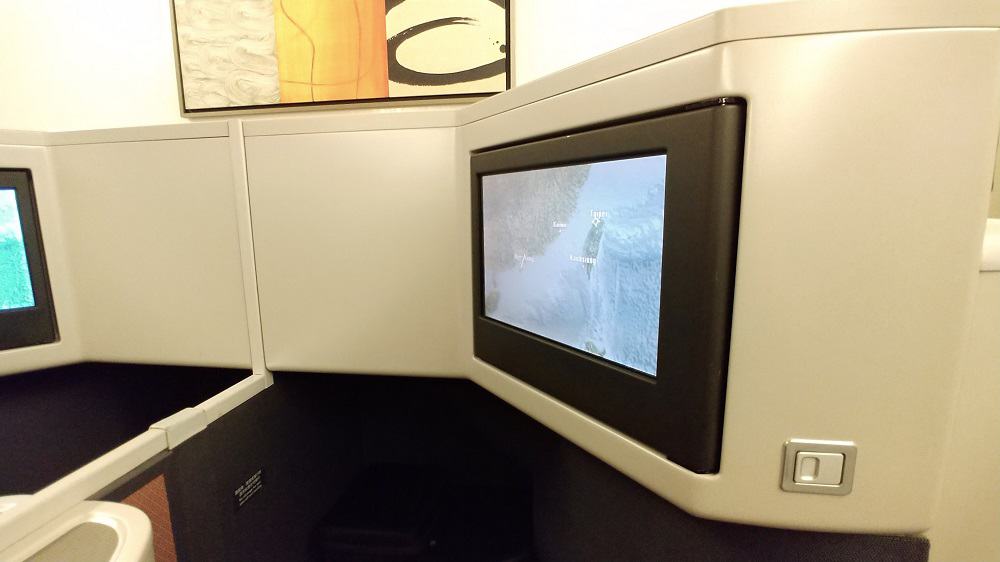 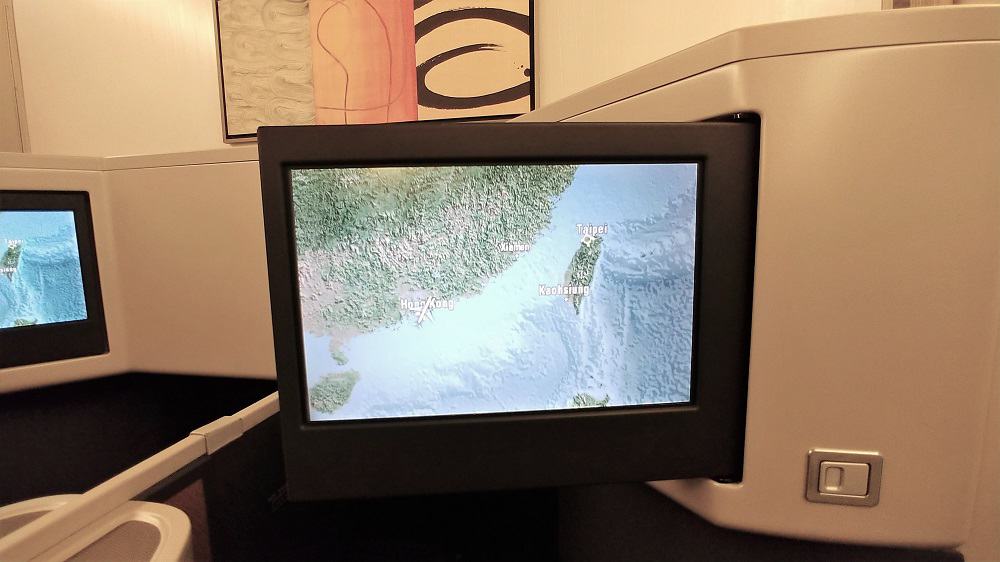 The food and beverage was more than enough for a two hour short haul flight. Jess and I were completely stuffed from visiting Cathay Pacific’s The Pier, The Wing, The Bridge, and the Qantas Lounge at Hong Kong Airport. However we still managed to try a few bites of everything.

Here are the dining, wine and beverage menus: 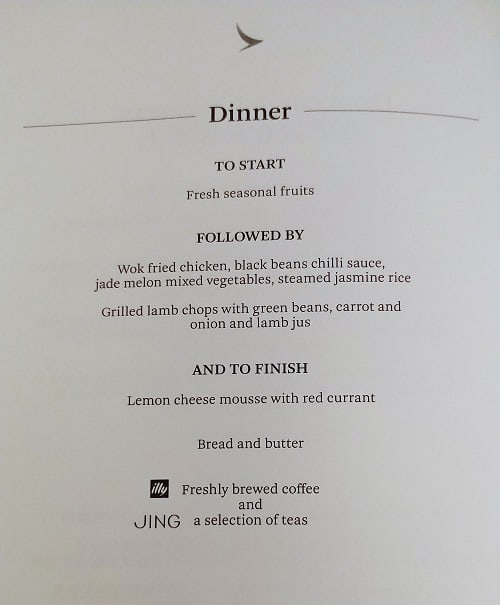 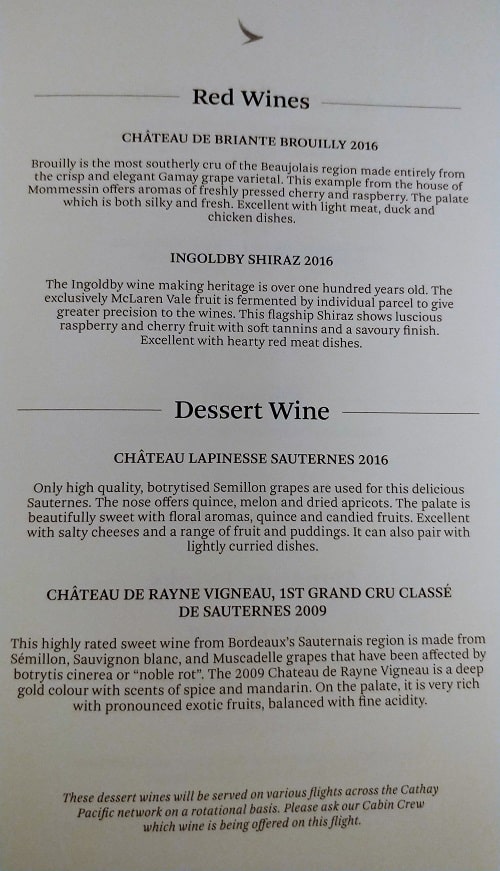 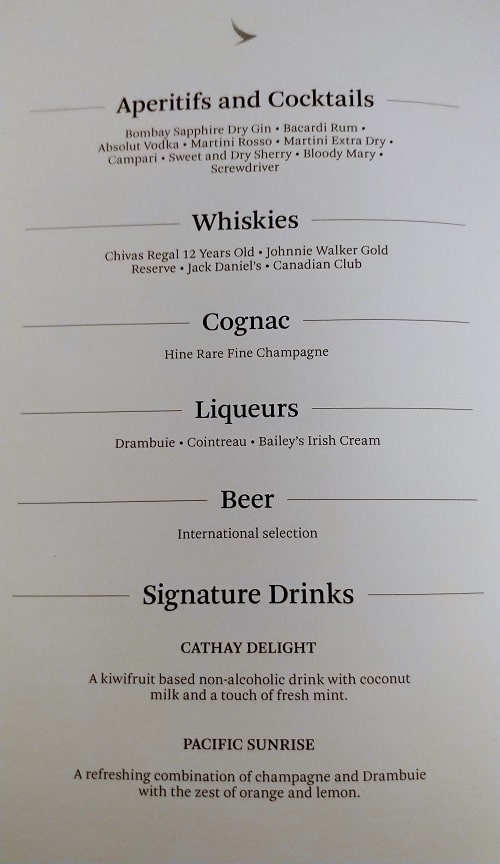 Since it was just a two hour flight from Hong Kong to Taipei, all the food was brought out on one tray. On longer flights, Cathay Pacific brings out each course separately for business class and first class passengers.

I ordered the grilled lamb chops which was very tasty and cooked perfectly. 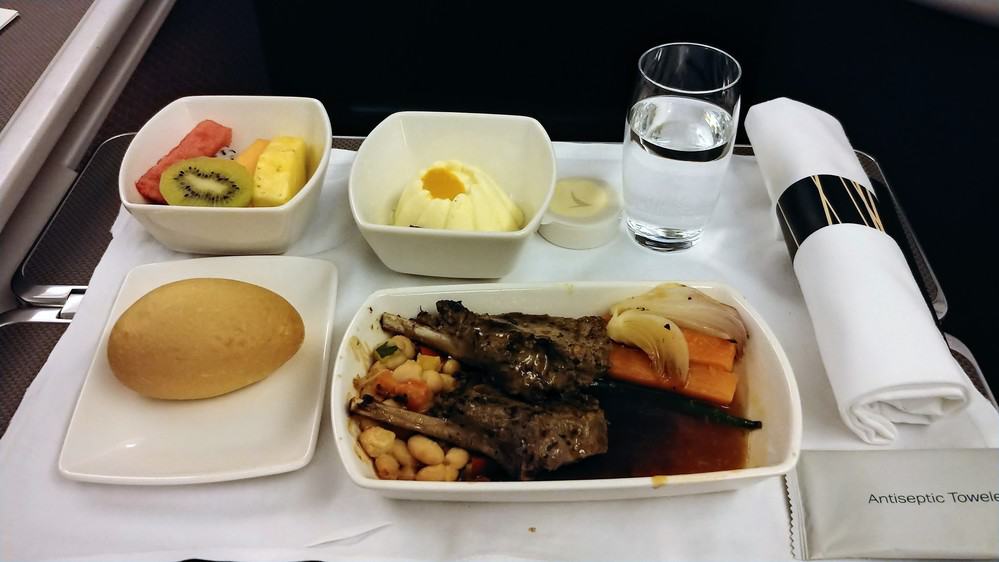 Jess ordered the wok fried chicken which was also just as delicious. 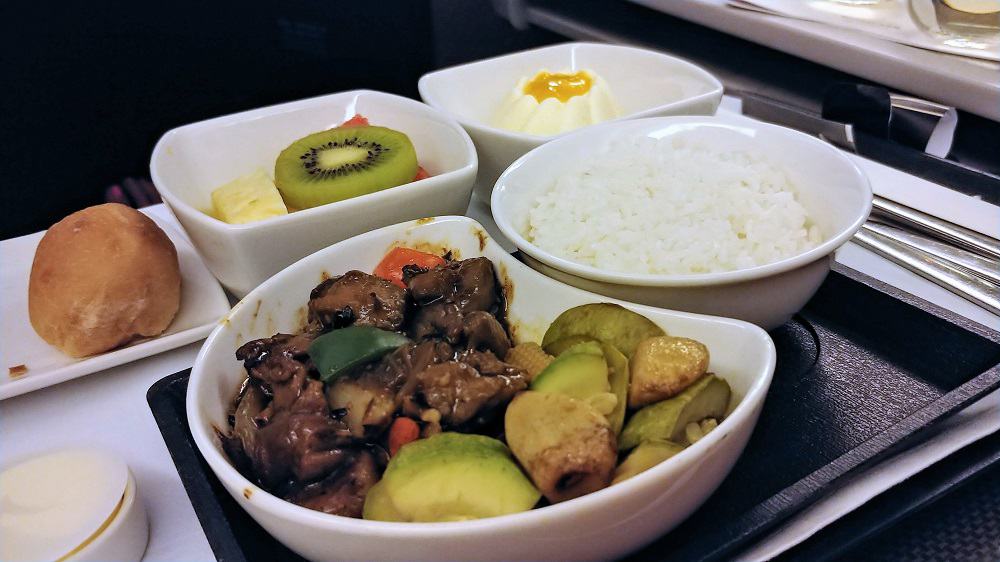 The Cathay Pacific business class flight from Hong Kong to Taipei was plenty nice for a two hour short haul flight. Additionally it allowed us to try out their short haul business class product. While nothing was revolutionary on this flight, everything was well done, the food was delicious and the service was great.

One of the best values to be obtained from this routing would actually be booking a first class ticket for 18K British Airway miles. This would allow you to try out Cathay Pacific’s first class product, and most importantly be pampered at their world class lounges at the Hong Kong Airport!